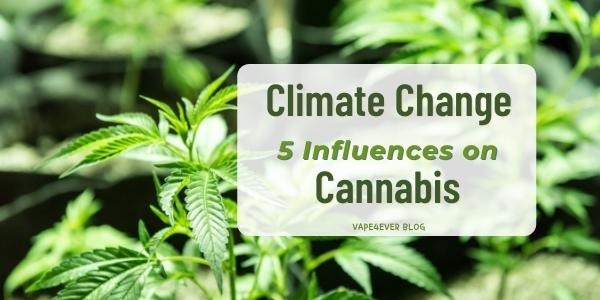 Top 5 Ways in Which Climate Change Could Influence Cannabis

Climate change is affecting almost every aspect of our lives. Probably, the agriculture industry will face the most considerable effect because global warming affects climate patterns and the availability of water. As such, it is appropriate to expect these climate changes to affect the cannabis industry as well. Why? As more countries worldwide legalize this industry, the demand for cannabis for a healthy lifestyle will dramatically increase. Therefore, cannabis cultivation will be on the rise. At the same time, the global climate is changing, meaning that the change will affect the cannabis industry. So, how could climate change affect cannabis cultivation in particular and the industry in general?

In this article, we will tell you regarding the top 5 ways climate change could influence cannabis. Read on to find out how.

We May Grow Cannabis in Higher Volumes

This could be iconic because it is expected that the extreme weather conditions resulting from climate change could lead to a reduction in the volume of agricultural activities. This perception is generally true because most crops cannot withstand elevated temperatures associated with global warming. However, cannabis is a tough plant and can grow in high temperatures. Eventually, people will abandon the cultivation of other crops and turn to cannabis cultivation under elevated temperatures to meet the needs of the growing weed demand.

Cannabis growers may not need to cut down on the amount of cannabis to grow due to water shortage. Why is this so? Because it is anticipated that the cannabis plant may adapt to need smaller amounts of water than it currently requires. Weeds have an extremely significant capacity to adapt to extreme weather conditions. Given that cannabis is a type of weed, some botanists believe that cannabis will adapt to the extreme conditions brought on by climate changes, such as drought. Consequently, the effort to meet the increasing demand for cannabis could not be affected adversely. Instead, we are likely to see an increase in the number of weed plants as the crop adapts to need less water than it does currently.

The Potency of Cannabis Strains Could Increase

One of the effects of climate change is adaptations. As climate change makes life difficult for organisms, they adapt to these changes for their survival. Similarly, plants such as weed may adapt to climate changes for their survival. One of the ways they may react to tough conditions, such as extreme heat and disease, is by releasing more of their medicinal properties. As such, weed shall still survive, but its potency may increase as the plant releases more of its medicinal properties to defend itself from extreme conditions.

We May Turn to Hemp as the Best Source of Fuel

As the world struggles with the adverse effects of change, stakeholders are continuously looking for ways to save the planet. One of the ways is the use of clean energy as fossil fuel contributes significantly to the greenhouse gas emissions, which result in climate change. Hemp is an incredible source of fuel, but it is yet underutilized. Consequently, it is highly likely that the hemp plant may be considered the only viable and best fuel alternative in the future. By the way, you can know more about hemp by reading the hemp plant anatomy.

As you have seen, you don’t have to be worried about the future of cannabis plant as the world experiences climate change. You will still have access to enormous amounts in high potency. However, we shouldn’t celebrate climate change because you need much more to survive than just a puff. The best part is that the cannabis plant could save the planet from the damages of climate change!

By entering Vape4Ever, you affirm that you are of legal smoking age 21+ and you agree to be Age Verified.