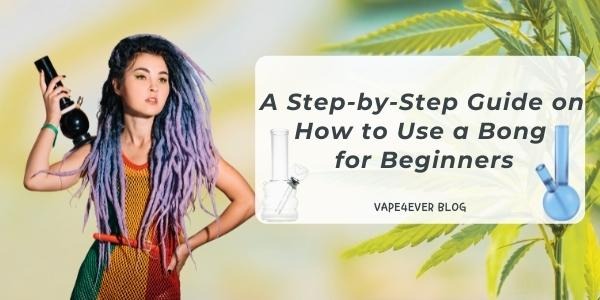 Bong is one of an advancement that took place with changing times. It is responsible for making the smoking experience much more amusing and facile. It is less damaging by filtering and cooling the smoke in a certain way. Nowadays, bongs are easy to find in local smoke shops or online head shops. After buying bongs, you may face difficulties on how to use them. No worries, here is a complete guide for beginners on how to use a bong.

What Is A Bong

Bong is a smoking device with a water filtration system used to smoke cannabis, tobacco, or any other herbal substance and is also known as a water bong or a water pipe. The well-known water pipes include gravity bong, glass bong, and silicone bong. The bong involves several intricate parts operating together. Now, if you are an avid smoker or a newbie, you must wonder how a bong works. Getting an awareness of how these parts operate can help you avail yourself of the opportunity of making your smoke more enjoyable.

Mouthpiece: The mouthpiece is the final step of your smoking session. It is the place where you inhale the smoke. Mostly, mouthpieces are straight with a flat finish, one of the most common styles amongst traditional bongs. However, advancement in its styles is taking place with new artists coming into the field.

Bowl (Slide): The bong bowl is an attachment where your smoking substance is placed and heated. The bong bowl commonly comes in 10mm, 14mm, and 19mm sizes. You can find the matching size when you select one for your water pipe. Various glass bong bowl pieces are popular in the bong shop or online headshop.

Chamber: The chamber is the space at the bottom of a water bong. It is an iconic and basic part of both dab rigs and bongs. Many bong types are named according to the shape of the chamber, such as beaker bong, bubbler bong, and bubble bong. You can also find hot-selling straight tube bongs in the weed bong market. Just after the smoking material in the bong bowl is heated, it releases smoke through the downstem, which then moves into the chamber. As smoke enters the water chamber, it gets mixed with the smoke, and diffusion comes into play.

Downstem: The downstem is considered a primary type of percolator, responsible for carrying smoke from the bong bowl into the water chamber, allowing it to cool the smoke down as it cycles through. Since the downstem is consistently touching the water chamber, water acts as an aiding agent for the downstem to do its magic. It creates tiny bubbles, which allows more excellent surface area coverage for more significant cooling effects. If you are chasing hits with higher purity, you may consider using percolator bongs of various kinds.

Carb (Optional): A carb is an opening through which fresh air enters and smoke is pushed out of the chamber. Sometimes, a downstem is used as the carb when bong water pipes have removable bong bowls. Whereas others have consisted of a hole you seal with your thumb while taking a hit. When your thumb is removed, fresh air moves in to help you clear the smoke from the water chamber.

How To Hit A Bong

Bongs have been a favorite of smokers because of their convenience. You must know the proper usage of the best water pipe to enjoy the full range of cannabis consumption since bong is a staple of cannabis culture. Here's a step-by-step guide on how to use a bong.

First, you need to fill the bong with mineral or tap water via the mouthpiece - just the exact first step when you use a dab rig. There is no specificity regarding the quantity of water because it varies according to the size of the bong you use. However, the amount of water should not be more than 1 inch above the downstem. Water splashes might take place if you try to refill them while smoking.

Grinding cannabis is the second and mandatory step since you don’t want to inhale large pieces of cannabis. Weed grinding can be done by the use of your hands, scissors, or a weed grinder. If a weed grinder is being used for this purpose, you should take off the lid and place 2 or 3 buds of cannabis. Finally, close the lid and move it back and forth to grind the cannabis well. You will love the convenience of such kinds of weed accessories once you try herb grinders.

The next step is placing the large pieces of cannabis in the bottom of the bong bowl before adding the finely ground cannabis. These large pieces of cannabis tend to act as a filter that prevents the powder from getting sucked while smoking. The amount of cannabis placed in the bowl depends on the number of people available to enjoy the cannabis. An air passage must be kept while placing cannabis, and if not provided, you can use anything small such as a paper clip for setting it appropriately.

Holding the bong bowl with your non-dominant hand is the next step. You can hold around the suction chamber, or even the lower part of the straw can be held. Once the settings are completed, selecting an appropriate spot for enjoying marijuana is vital before the heating operations. An open space is usually preferred to avoid being engulfed in smoke; moreover, assure that the spot is free of flammable objects.

Step 5: Place Your Mouth on the Mouthpiece

Taking a few deep breaths is recommended as it will enable your body to get filled with oxygen, which facilitates you in inhaling the smoke from the bong without causing a lot of coughs. Then place your lips inside the mouthpiece and make sure openings are sealed.

Lighting the bong is also a bit technical; you should make sure that flame is not being placed in the center of the bowl as it will accelerate the burning of cannabis. Thus, you should avoid rushing in this period. Lighter is used primarily for lighting the bong and assuring that the flame stays at the edge of the stuff in the bowl since the main goal is to keep the stuff longer.

Step 7: Inhaling Smoke from the Bong

Igniting stuff in the previous step eventually leads to smoke appearance but here, the benefits of bong come into play. Due to its construction, your lungs are not filled with smoke immediately. All you have to do at this point is inhale gradually and use only your breath to draw the smoke from the chamber. Stop lighting the fire once the desired amount of smoke has been taken. Unlike a dry herb vaporizer that produces vapor, you inhale smoke from a bong pipe. But as you see, a bong offers longer hits, especially suitable for those who love bigger hits. If the chamber has extra smoke, you should cover the mouthpiece with your fingers. You can continue to smoke until the chamber of the bong gets filled with smoke. However, it's up to your choice; only you can smoke half of the hits from the bong. When the bowl is removed from your bong, you have an option to stop covering the mouthpiece with your hand. A continued inhalation is required to clear the smoke in the chamber. If you want to take a break, continue the process of protecting the smoke with your palm, or the other option is to put the bowl back in place.

Finally, exhale the smoke into the direction that assures it's not troubling anyone nearby. Then you should place the bowl back into the downstem or clean it if it is finished.

Tip: Make sure that your utensils are kept clean for enjoying the best taste while smoking. Maintaining the bong with premium bong cleaner and careful protection is essential.

How To Hit A Bong With A Carb Hole

Carb is a small hole on the water pipe bong located directly next to the bowl on the side of the bong. However, carb is not always found on the bong, but whenever it is there, the appropriate way to hit the bong is to cover the carb with your thumb or finger while you light the smoking substance and continue it until you inhale the first half of the puff. This makes your hit much smoother and cleaner. For inhaling the second half of your hit, release finger or thumb let the airflow in through the carb hole leading to the clearing of the chamber. This process can be repeated depending on your desire; however, you should be careful while consuming.

An absence of a carb hole causes the smoke to get trapped in the chamber of your bong, which eventually makes the hit weaker and loss of inhalation results.

Tip: Make sure that you should keep inhaling after removing your thumb or finger from the carb so that all of the smoke is cleared and a much more successful hit takes place without leaving any vapor out.

How To Hit A Bong With An Ash Catcher

An ash catcher is responsible for preventing the excess ash from your smoke from entering your bong's central part. It is one of the most useful weed accessories for bongs and pipes. This gear is an iconic part of the recycling bong, keeping the bong clean for a more extended period. Ash that would fall otherwise into your mouthpiece falls into an ash catcher, which can be easily removed and cleaned instead of cleaning your entire pipe. The requirement to add water in the glass attachment depends upon the type of ash catcher. An ash catcher consists of two joints; one is for your bowl, and the other is for your bong stem. First, you have to insert the bowl by pointing upward joint, while the stem of the bong gets the downward joint inserted into it.

Knowing exactly how to use a bong with weed accessories can make your smoking process much more fun. Bongs should be filled with water, and packing the bowl with dry herb before smoking out of a bong is necessary. Then light the bowl; this will fill the smoke chamber with smoke, after which you can inhale. For a new beginner, it's advised to process it gradually until you get comfortable with water bong usage. Just a few experiments can make you avail yourself of the opportunity of enjoying your smoking sessions much more with the simple use of the bong.